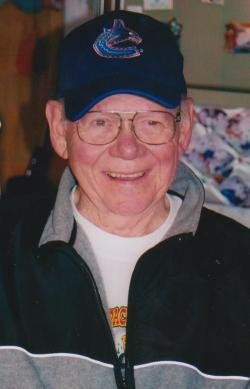 BALDWIN LEO D. - At the Campobello Lodge, Welshpool, NB on Monday, June 1st, 2020; Leo David Baldwin, husband of Deanna (Malloch) Baldwin. Born in Victoria, B.C. he is the son of the late Edwin Roderick & Grace (Jones) Baldwin. For almost 38 years Leo worked with the Royal Canadian Air Force as a weapons technician. When Leo retired in 1990; he and Deanna always wanted to move to the island of Campobello and thoroughly enjoyed his time there. He became very involved with the local Royal Canadian Legion for many years. Leo & Deanna became very involved in the lighthouse restoration project starting in 2006. Surviving in addition to his wife Deanna of 57 Years are his son Robert & his wife Sue of Moncton, NB, 2 brothers Roy (Mary) of Victoria, BC, and Neil (Shareen) of Vancouver, BC 5 grandchildren Joel, Ben, Brandon, Brooklynn and Amelia, and many nieces and nephews. Leo was predeceased by his daughter Bonnie Phillips and his sister Roberta. By Leo’s request there will be no visitation or service at this time. Cremation has taken place. A memorial celebration of his life will take place at graveside on the island at Wilson’s Beach Community Cemetery at a later date. In lieu of flowers, donations to Alzheimers Society or a charity of the donors choice would be appreciated by the family. On line condolences to the family or donations can be made at www.humphreysfh.com Arrangements have been entrusted to the care & direction of Humphreys Funeral Home, 20 Marks Street, St. Stephen, NB E3L 2B2 (506 … 466 3110)

Share Your Memory of
Leo
Upload Your Memory View All Memories
Be the first to upload a memory!
Share A Memory