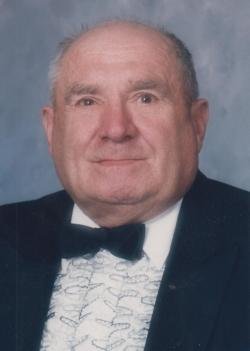 It is with great sadness that the family announce that George Dougherty Stevenson of Old Ridge, NB, husband of the late Pauline (Getchell) Stevenson passed away suddenly at Lincourt Manor Inc. on Thursday, May 7, 2020 at the age of 91. He was the only child of the late Aubrey C. Stevenson and Gertrude (Scheider) Stevenson. Pre-deceased by his wife Pauline who sadly passed away on November 1, 1971 and Great Grandson - Liam Matheson. George is survived by five children Donald (Carole) Stevenson of Rothesay, Joanne (Gerald) Christie of Oak Hill, Gordon (Sheila) Stevenson of Crocker Hill, Kevin (Susan) Stevenson of St. Stephen and David (Cindy) Stevenson of Old Ridge, all of NB. Survived by eleven grandchildren -and seventeen great grandchildren - Robert (Rachel) Stevenson - Noah, Zoey and Aubrey, Tony (Shelby) Stevenson - Marshal and Bryce, Steven (Marla Anderson) Christie - Benjamin, Kathy (Geordie) Hull - Emily and Zachery, Donna ( Daniel) Leavitt - Hannah and Christopter, Shelley Chisholm - Tonisha Chisholm, Laurie Stevenson - Lance, Meadow and Destinie Greene, Alyssa (Dan) Dalton, Victoria (Michael) Stevenson-Harris - Julia, Amanda (Kyle) Matheson - Kinsley, Amy Stevenson and Sean - Aislinn Warford and brother-in-law Chester (Elaine) Getchell, several nieces and nephews. George supported his family over the years by working at various occupations including hauling wood, working at the Cotton Mill , Ganong Bros Ltd., running the projector at the Queen Theatre and Manager of signage for the Department of Transportation District 8. He operated his own flooring company and in later years expanded into a cleaning business until retirement. George enjoyed socializing and participating in several different organizations. He was an elder of the Kirk McColl United Church, a member of the Sussex Lodge #7, Order of the Eastern Star St. Stephen #8, Luxor Shriners of NB, Eastern Lodge #7 in Eastport Maine, Olive Rebecca Lodge/Odd Fellows and Town and Country Square Dance Club. Many Saturday nights were spent with George and Pauline hosting gatherings that included music and square dancing. The evenings typically ended with fish chowder and sweets at midnight at their family cottage in Oak Bay, NB. He loved to dance and participated in many events held by the various dance clubs. George would try anything even flying lessons. He loved the CB Radio and Ham Radio Clubs. In later years he developed a passion for wood carving with his friends, spending time with his friend, Irene, and working on electronic documents that told the family history. He enjoyed staying in touch with family and friends through the internet. Due to Covid -19 distancing regulations, there will be no public visitation. A private family service will take place at a later date to be announced with interment at the St. Stephen Rural Cemetery. In lieu of flowers a donation to Heart and Stroke Foundation, Charlotte County Cancer or the charity of ones choice would be appreciated by the family. Donations can be made at Humphreys Funeral Home. Condolences may be sent to the family on line at www.humphreysfh.com.

Share Your Memory of
George
Upload Your Memory View All Memories
Be the first to upload a memory!
Share A Memory