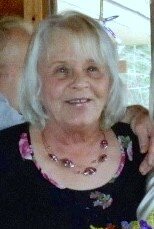 It is with many tears and great sadness that the family of Joan Elizabeth Dow wish to announce her sudden passing at the Charlotte County Hospital in St. Stephen N.B. on July 26th, 2022.

Born in St. Stephen N.B, daughter of the late John Fleming and the late Inez(Erskine) Fleming. Joan grew up in St. Stephen, where she spent her entire life. Joan was all about her furry friends, they were her entire world.

In her early years, most of her time was spent on the back of a horse. This passion continued on throughout her pregnancy of her only daughter Kimberly. She’s always had a canine companion/best friend. The late Katie, Tim and Finley were her Boston Terrier angels. She loved them more then anyone will ever know. She had the most generous and kind soul, and was a very dedicated worker. She spent decades at Ganong Bros. Ltd.

Joan has spent many years caring and helping her nephew, who has long term disability as a result of an accident. This speaks to her generous and loving nature.

She leaves behind as before mentioned, her daughter Kimberly Ann(Dow) Ganong. Her grandchildren Amanda(Chris) Blizzard, Justin(Cara) Getchell, Erica(Tyler) Marshall, Sheena(Dillon) Hildebrand, Megan(Bryton) Curry and Cherish(Kurt) Helpert. Not to mention many many great grandchildren, friends and neighbours. She will also be missed by her only sister Marie(Fleming) Henry and her two nephews Steven and James Ryan.

At Joans request, there will be no service. For those who wish, donations in Joans memory can be made to the Charlotte County Animal Shelter. Condolences may be sent to the family online at www.humphreysfh.com

Share Your Memory of
Joan
Upload Your Memory View All Memories
Be the first to upload a memory!
Share A Memory