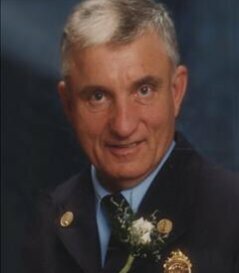 Harvard Clayton Scott, 81, went peacefully at his home in St. Stephen, NB; to meet his beloved wife, Donna (Carter) and be with his Lord and Saviour on Friday, April 29, 2022.

Harvard was born on December 7, 1940, to the late Chester and Evelyn (McLaughlin) Scott of Lawrence Station. By age 16 Harvard was working in the woods with his father. Harvard then later became a brakeman on the local railroad for six years. He married the love of his life, Donna Marie Carter, on June 25, 1965, in St. Stephen where they built their home and raised their family. Harvard worked as a truck driver and a snowplow operator with the town of St Stephen before moving to the fire department where he ended a distinguished career after 34 years of service.

He enjoyed hunting, fishing, golfing and above all, spending time with his family. As an active member of the community, Harvard was often involved in church activities, local Fire Department functions and coaching sports. In his retirement he could be found on the golf course as a member of the St. Stephen golfing community and watching local sporting events.

Having lived a rich, full life, Harvard is survived by his family: his three children, Ann Dempsey (Jeff), Heather Ingalls, Michael Scott (Sheryl) as well as his grandchildren, Alexandra (Allie) Ingalls, Emma (Dempsey) Hemphill (Brett), Andrew Dempsey, Joseph Dempsey, Katherine Scott and Isabelle Scott, each of whom brought much joy, laughter and love to him and Donna over the years. Harvard is also survived by his first great-grand child, Soren Hemphill along with many nieces and nephews who greatly enriched his life. Honorable mention: Harold Burns (predeceased) colleague, best friend, and partner in crime.

Time spent with brothers and sisters Glenn Scott, Muriel Fairweather (predeceased), Murray Scott (predeceased), Melva Scott, Neil Scott (predeceased), Wayne Scott, Lloyd Scott, Debbie Boles, Sterling Scott, and Dwight Scott, while hunting “out home” in the Lawrence Station area was his greatest enjoyment. They all took great pleasure in recounting family stories around the table. Harvard always looked forward to the family reuniting each summer on Scott Day. With over 20 nieces and nephews, Harvard could be heard laughing and storytelling along with his siblings and their families. His warmth and humour at these gatherings will be missed.

A celebration of Harvard’s life will be held at Mays Funeral Home at 26 Church Street in Calais, Maine, on May 18th at 2:00pm (Cdn) (1:00 p.m. EST) with an interment at Forest Hills Cemetery, Pembroke, Maine, following the service. For family and friends that are unable to attend in Calais on the 18th, there will also be a graveside service in Community Cemetery on Richardson Road in Lawrence Station, on May 19th at 3:00pm (Cdn).

A Link has been provided below for those who would like to view this wonderful tribute and salute to Harvard's life.

Donations in Harvard’s memory can be made to the St. Stephen Food Bank (Charlotte County Volunteer Centre), or First Steps Housing in Saint John

Share Your Memory of
Harvard
Upload Your Memory View All Memories
Be the first to upload a memory!
Share A Memory