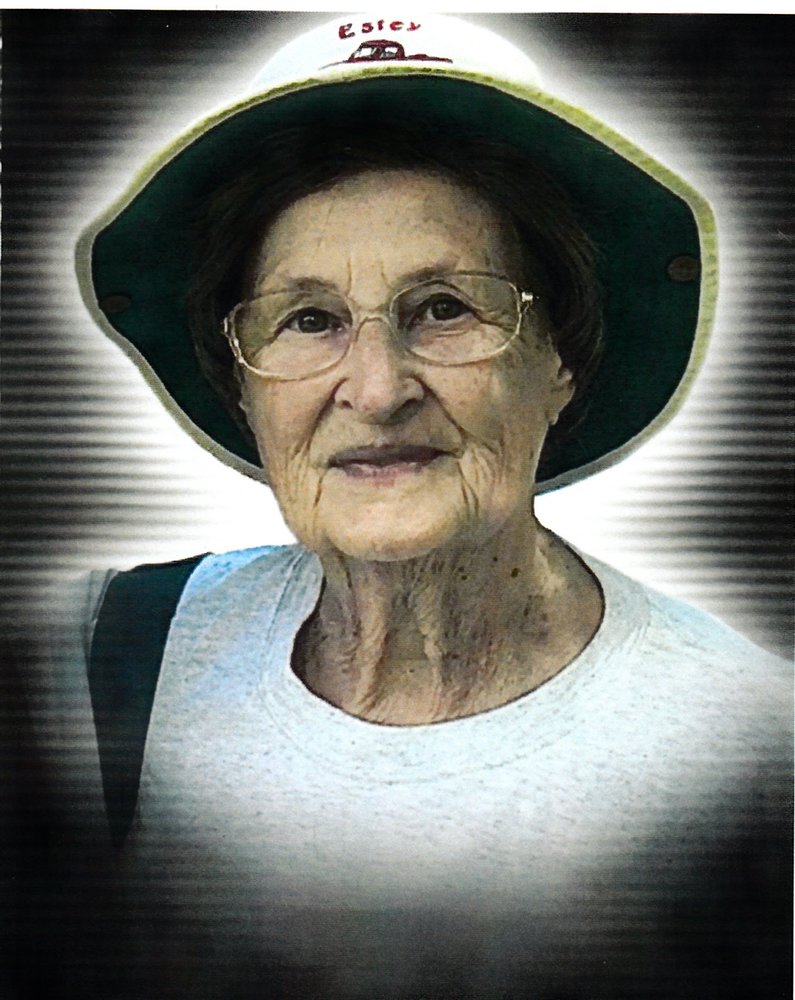 Full Time Mother of Eight and Health Care Worker. Born in East Florenceville on April 18th 1931, named for her father’s mother but known to friends and 8 children as “Mum” or as “Faye”, and to her 19 Grandchildren and 11 Great Grandchildren she was their “Nannie”. Having experienced a long and wonderful life, she died peacefully in the Charlotte County Hospital, June 3, 2021, age 90.

Faye Mossman was born on her father’s 100 acre Carleton Co. potato farm, the 3rd of four children. Her parents, George and Jean Mossman, emigrated from Scotland in 1929, arriving in Canada with 10 year old George and 8 year old Janet. Two years later, Faye was their first born child in Canada, John would follow in 6 years. Growing up isolated on a small farm she didn’t know what a Canadian was, but it wasn’t Scottish and she so wanted to be like the rest of her family, who always called her “the Canadian”. It wasn’t until she went to school that she understood that being Canadian was a good thing.

Faye was not a traditional daughter. She preferred the barn to the kitchen and loved all the animals, making them her pets despite her fathers’ admonishments to avoid doing so. Her mother was a strictly private person, always scolding Faye to “not tell everyone your business”. Besides school, Faye’s few excursions off the farm were to ride her bike six miles to Florenceville to deliver eggs & butter that her mother sold for much needed cash. Faye was proud of the fact that, when she was young, she “could run like sixty”. Her excellent fitness was no doubt a result of racing her bike to town so that after her errands, she might say hello to a friend, always mindful that her mother knew how long the trip should take and would take her to task if she was not back on time.

Faye’s world turned upside down when WWII broke out. She was only 9 years old when her father enlisted in 1940. Most of the farm animals had to be sold and when her father returned from the war he never returned to active farming. Faye focused on school where she made lifelong friends.

After she turned 65, she organized class reunions, driving 2 ½ Hours to Florenceville for an afternoon social and then back the same day. When she turned 80, her only concession was to allow her son to drive her. This continued until her mid eighties when she finally concluded that her classmates were too old and too few to make these events worth continuing. Faye first met Pat Estey at a Christmas dance in 1946. Faye recalled that she was not impressed with this bold and brash Pat Estey. Despite Pat’s persistence, Faye was wary of a serious relationship. She completed Teachers College and taught school for 2 years before agreeing to marriage. Pat brought his new bride home to his family farm in Centerville, to live with his mother and his younger brother. Pat wanted a big family. He and Faye had three children in the first 4 years, adding a forth and expecting a fifth when they moved to a farm on the Kingston Peninsula 9 years later, where she delivered three more children in 4 years! Being a farm wife was never easy. When the family moved half-way across the province to Kingston, Pat went on ahead to get things ready ... he took one of the children with him. Faye, seven months pregnant, drove down a week later with the other three! Pat left farming in 1966 to become a Millwright, moving his family to St. Stephen in 1967. It was hard for Faye to leave the country life and move into town, but it didn’t take long to realize that it was the best thing for her children. She enjoyed the next 54 years, living in the same house, seeing her children grown, married and have children of her own. She made their home a special place where all of her children’s friends were welcome, treated as individuals and encouraged in their unique ideas.

On April 23rd, 1997 Pat & Faye celebrated the 50th anniversary of the day he came up the hill to her father’s farm, to call on her for the very first time. He showed up that day with, a fresh picked bunch of pussy willows. Every year they were together, he always brought her a bunch on her birthday, April 18th. She put them in a vase and let them dry out, to remain on the window ledge all year. Sadly, all too soon, Pat passed away in May of 1997, leaving Faye without a purpose for the first time in her life. She drifted a while before embracing her growing family and truly taking on the persona of Nannie Faye. It was remarkable to see her embrace new technology and social media. Living alone in the family home, she was thankful that Facebook allowed her to be involved in the day to day life of so many family and friends. Her grandchildren were a wonderful comfort and she travelled frequently for extended visits with them. She participated in family adventures too numerous to mention, but the following “Nannie on the Nahanni” trip illustrates the challenges she would brave to be with her children. In 2000, at age 69 she joined her son and daughter for a 300 km rafting trip down a wilderness river called The Nahanni. It is located in the Northwest Territories. They joined a group of fellow travelers, her son acting as one of the River Guides. They flew bush planes two hours out from Fort Simpson to land on the Nahanni river above Virgina Falls. A steep portage down into the 300 foot canyon was required to start their journey into a series of four river canyons, each successively deeper, with the walls of 4th towering 4,000 feet above them. They travelled 10 days down the river through rapids named Figure 8 and Lafferty’s Riffle, stopping for the night at rough campsites named Headless Creek, The Gate and Kraus Hot Springs. In 2017, at age 86 she joined her best friend for the “Nannie & Annie Alaska Cruise”. The cross Canada trip included a flight to Calgary where they stopped to attend the Calgary Stampede Rodeo. Then a two day drive through the Rocky Mountains for a rest in Chilliwack before crossing the border to catch a Cruise Ship departing Seattle. Skeptics might say that Cruise Line advertisements exaggerate the benefits of their product but, eye witness accounts observed giddy “school girl” behaviour while boarding before, and disembarking after, their seven days at sea. It must have stirred youthful enthusiasm, because they were later pictured having a fast ride on a twisty back road near White Rock, in a vintage 1963 Nassau Blue Corvette convertible with the top down.

Nannie Faye lived a full life and showed us remarkable resilience in overcoming the numerous challenges she faced along the way. Most of all she showed us by her example how to make friends, care for everyone you meet and provide assistance to those who need it. At each age and stage she remained independent and lived life on her terms. Remaining in her own home until the age of 90, she celebrated her birthday with family, socially distanced of course, on her own sun deck.

Despite spending her last 10 days in Palliative Care in the Charlotte County Hospital, Nannie Faye was able to receive final visits with family and close friends. The CCH staff ensured she rested comfortably allowing her to participate in a marathon of storytelling, well wishes and listening to CCR “turned up loud”. She retained her sharp mind, love for her family and adventurous spirit right up to her final hour … telling us all to look for a sign that she would send each of us from the “other side”. __________________________________________________________

Nanny  Faye loved a big gathering, so the Estey Family will host a Celebration of Life once Covid restrictions are lifted. We look forward to seeing you then, as we celebrate a life well lived. In honour of her love of helping others and all the meals Faye has prepared for family, friends, and neighbourhood kids; donations to We’ve Got Your Back are appreciated by the family. We’ve Got Your Back is a local program that provides local children and youth with a backpack of food each week. WGYB Donation instructions: Email: donate@wgyb.ca (automatically gets deposited to WGYB bank account) Mail a to cheque: We’ve Got Your Back Foundation Inc., 28 Main Street St. Stephen, NB E3L 1Z1 You can connect directly to their link by copy & pasting wgyb.ca to your web browser

Paypal link: Donate – We've Got Your Back (wgyb.ca)

Share Your Memory of
Faye
Upload Your Memory View All Memories
Be the first to upload a memory!
Share A Memory