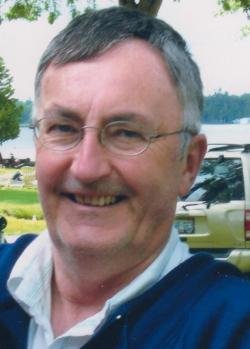 Obituary of Ronald A. James

Mr. Ronald Albert James, of Oak Bay, NB, peacefully passed away at his residence with his wife and son by his side on Wednesday, May 7, 2020 at the age of 72 after a three-year battle with Cancer. He was born to parents Eleanor Leaman (Hiltz) and Albert James in St. Stephen, NB. Ron graduated from St. Stephen High School and went on to receive his electrical licence. Ron was a successful business owner and skilled electrician. He spent 10 years with the federal government, in the Department of Public Works, as an electrical inspector for the Maritimes. He retired, but did not slow down, in 2015. Ron (affectionately known as “RJ” and “Pepa” to his grandchildren) married Marilyn James (Nixon) in 1968 who survives him. Ron is also survived by his three children Deborah Parsons and husband Todd, Brian James and wife Tara and Darren James and wife Wendy, as well as his grandchildren Taylor, Connor, Kaya, Quinn and Finley. Ron is also survived by his brother, Larry James, aunt and uncle, Bea and Don Hiltz, step-father Bill Leaman and cousin Sally Dickinson. Ron was predeceased by parents Eleanor Leaman, Albert James, step-mother Hilda James (Mohan) and his sister Terry Litt (James). Ron was known for hard work and a daily sense of purpose but always made time for his family, friends and a coffee. He enjoyed fishing with his sons and taking care of his property. To family and friends, he was known to be a problem-solver, could fix anything and always willing to lend a helping hand. RJ loved a good project. For those that knew him, you knew he was compassionate, generous and kind. He was a man of few words but his words counted and their silent presence will be felt. In keeping with Ron’s wishes, there will be no funeral. A graveside service will be scheduled at a future date. For those who wish, donations in memory of Ron may be made to the SPCA, the Volunteer Centre of Charlotte County, or the Rolling Dam United Church cemetery fund. Condolences may be sent to the family online at humphreysfh.com. Arrangements have been entrusted to the care & direction of Humphreys Funeral Home, 20 Marks Street, St. Stephen, NB E3L 2B2 (506 – 466 – 3110)

Share Your Memory of
Ronald
Upload Your Memory View All Memories
Be the first to upload a memory!
Share A Memory