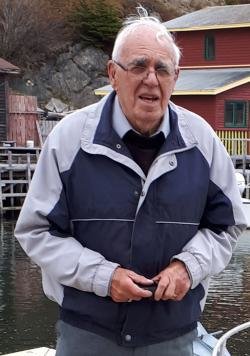 Peacefully at PassamaquoddyLodge with his family at his side March 26, 2020, Milton Leslie Cross went home to be with his Lord. Moe was married to the love of his life Joyce Rosalyn (Wentworth) for 62 years. Born in Yarmouth, NS he was the son of the late Leslie and Sarah(Feltham) Cross. Moe was a faithful member of the St. Andrews Baptist Church serving on many boards and committes, as well as a member of the Southwest Baptist Association for many years. He was a plumber by trade working for Henry Irwin and Bartlett's Plumbing before working for the Provincial Government as Industrial Park Supervisor for many years. He was also Wharfinger at the Bayside Wharf. Moe was a former member of the Kiwanis Club for many years serving as president and was on town council serving on many committees. Woodworking was a love of Moe's and he could often be found working in his workshop building some idea of one of his family members - often just from a picture or an idea. He was proud that he built his first house and was always helping with a renovation or project where needed - whether it be family, friend or Church. His greatest achievements were the intricate dollhouses he built for his granddaughters and are treasured heirlooms. The cottage on the Glebe Road was a special place to Moe and the children and grandchildren have many fond memories of growing up there - swimming, boating, playing on the beach, campfires and long walks. Moe loved the outdoors and was often on the golf course in years past. He played up until a year ago at the course in St. Stephen. In recent times he could be seen walking around the trails in town. Moe is survived by his children Cathy (Pat), and Jeffrey(Alison) of St. Andrews, and Heather(Justin) of Woodstock NB; 8 grandchildren - Erin, Graham, Adam, Jennifer, Megan, Nathan, Ashley, Tyler; 6 great grandchildren - Sophie, Rowan, Evie, Isabella, Noah, and soon to be born Gabriel; 2 sisters - Lila Haughn and Verna McFarlane of St. Andrews, and Gordon of St. John's, NF and several nieces and nephews. Moe was predeceased by his beloved wife Joyce, brothers Ewen and Arnold(Skid) and great grandson Mason. By Moe's request cremation will take place. A memorial service will take place at a later time and place to be announced. In lieu of flowers donations to the St. Andrews Baptist Church Building Fund or the Charlotte County SPCA would be appreciated by the family. Online condolences can be made to the family or donations can be made at www.humphreysfh.com. Even though Dad was not at Passamaquoddy Lodge long he was happy and content and a special thank you to the wonderful staff for the loving care they showed him. Arrangements have been entrusted to the care and direction of Humphrey's Funeral Home, 20 Marks St., St. Stephen, NB E3L 2B2. (506-466-3110)

Share Your Memory of
Milton
Upload Your Memory View All Memories
Be the first to upload a memory!
Share A Memory